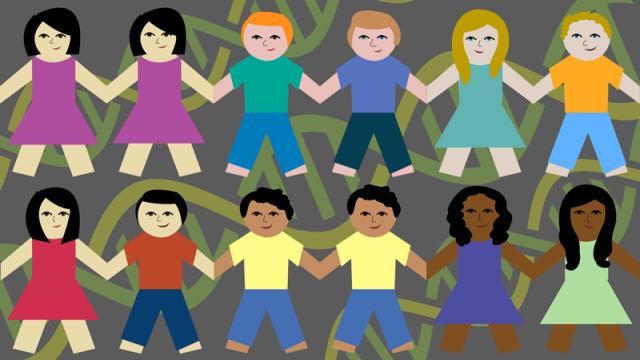 Behavioral genetic methodologies from twin and adoption studies through DNA analysis will be described and applied to address longstanding questions about the origins of individual differences in behavioral traits.
Enroll in course

In Unit #2 the twin study method will be introduced and general findings from twin studies in psychology and psychiatry will be reviewed. The two types of twins, monozygotic (MZ) and dizygotic (DZ), will be described and methods for assessing their similarity will be given. We will also look critically at the limitations of the twin study method and discuss alternative research designs, including adoption studies and the study of reared-apart twins. The importance of convergent evidence from multiple research designs will be emphasized.

Some of the most contentious issues in behavioral genetics surround the concept of heritability – Is it a meaningful statistic? Can it be accurately estimated in studies on humans? How should it be interpreted? In this unit we will discuss what is meant by heritability and describe some simple biometric (i.e., quantitative genetic) methods used for it estimation. The unit begins with a review of basic Mendelian inheritance and the introduction of some genetic terminology we will begin to use in the course. The ACE model of quantitative inheritance is described and we will discuss how this model is used to analyze twin data. Finally, the important concept of gene-environment interaction is formally introduced. Beginning this week with quantitative genetics and continuing next week with molecular genetics we will be jumping head first into the thicket of human genetic methodology. For some, this material may be more challenging than that which we covered in the first two weeks of this course. These weeks will, however, provide the foundation we will need to investigate in depth behavioral genetic research on schizophrenia and intelligence in weeks 5 and 6. Please make sure to post questions you have to the discussion forums and especially to the office hours forum.

The Human Genome Project (HGP) was begun in 1990 and declared complete in 2003. It has revolutionized our understanding of genetics and will ultimately revolutionize medical practice. In my opinion, every educated citizen should know some basic findings from the HGP. This week’s lectures provide an introduction to molecular biology and the HGP. We will cover topics such as: What is DNA? What is a gene and how are genes structured? In what ways can human genomes differ? What is epigenetics and why do some researchers believe it is very important for understanding behavior? As in previous lectures, I will illustrate some of the basic human genetic phenomena through case studies, in this case ranging from calico cats to the human genetic disorders of Angelman and Prader-Willi syndromes.

This week’s lectures continue what we began last week: laying the foundation of genetic concepts and processes we will need to consider in some depth genetic research on schizophrenia and intelligence. Some participants in this course already have an extensive background in basic genetics and so will be very knowledgeable about material covered in the initial modules. But I think even these participants will have something to learn when we get to the later modules in the unit covering, e.g., Williams Syndrome, Prader-Willi Syndrome and Angelman Syndrome. For those with a more limited background in genetics, I recognize that the terminology introduced this week may at first seem a bit daunting. But if you stick with it, terms such as SNPs, methylation, exon, copy number variants, etc. which seem foreign now will become consolidated in your vocabulary through repeated use throughout the remaining lectures in this course. There are several learning aids I would encourage you to use. First, we have created a Glossay, which you can link to off the navigation bar on the course website. Second, the Discussion Forums are a wonderful source of help. Other participants can be very helpful in answering your questions and a post in the Office Hours thread will be reviewed by us for response in the weekly office hour video. Finally, we give again online genetics education links in the Other Resources section below.

Now that we have a foundation in basic biometric and molecular genetics we can begin to look in depth at genetic research for behavioral phenotypes. This week we will focus on schizophrenia. There are several reasons for this focus. First, genetics research has fundamentally changed the way researchers and mental health professionals think about this devastating illness; schizophrenia illustrates the successes as well as the limitations of the genetic approach to a psychiatric illness. Second, research on schizophrenia exemplifies what genetic researchers are finding with most common mental illnesses. Although, for example, the exact chromosomal locations of risk variants and the specific candidate genes implicated certainly vary from one psychiatric illness to the next, the basic features of the genetic architecture appears to be remarkably similar across multiple psychiatric illnesses, at least at this time. So an understanding of the genetics of schizophrenia will bring with it an understanding of much of psychiatric genetics.

Before discussing the genetics research, however, I think it useful that we all know at least a little about what schizophrenia is. Thus the first two modules in this unit describe the clinical phenotype and some of its basic epidemiology, information that will no doubt be very familiar to those of you with a background in clinical psychology or psychiatry. Twin and adoption studies helped to establish the heritable nature of schizophrenia (Module C) and characterize the nature of environmental influence (Module D). The current frontier in genetics research on schizophrenia is to identify the specific genetic variants that underlie its heritability. Initial attempts at identifying risk alleles using the positional cloning strategy were generally unsuccessful yet provided key insights into the nature of the disorder (Module E). Very recently, important breakthroughs have been achieved through Genome Wide Association Studies (GWAS; Module F) and rare variant analysis (Module G). Although the basic foundation for this course was introduced in Units 1-4 and we strive to minimize our use of jargon, sometimes the technical term is exactly what is needed and we will continue to introduce new terms throughout the remainder of the course. So please make use of the Glossary (linked on the navigation bar). We created it in the hope it would help minimize the impact technical jargon might have on your mastering the lecture material.

If there is an area of psychology that generates more heated debate than behavioral genetics it would be the field of intelligence research. While most of us acknowledge the differences among us in personality and even risk for mental illness, for some of us differences in intelligence seem more difficult to accept. I confess I am not completely sure why this is the case. Maybe it is because of the involvement of early intelligence researchers with the Eugenics Movement. Alternatively, maybe it is because the conclusions reached by some intelligence researchers seem to challenge our long-held beliefs about social equality, especially when those conclusions are biologically grounded. Regardless, intelligence, or as I prefer to call it general cognitive ability (GCA), has been a major focus of behavioral genetic research and we will use it as a prototype of behavioral genetic research on a quantitative psychological trait.As with the previous unit, we will begin with a brief discussion of what psychologists mean by intelligence or GCA. I will not try and review the vast empirical literature on the correlates of GCA; suffice to say that GCA is correlated, not always strongly, with many desirable outcomes including educational attainment, occupational achievement, health, mortality, criminal conviction, etc. Twin and adoption studies of GCA have implicated the importance of both genetic and nonshared as well as shared environmental influences. Behavioral genetic research has helped to identify features of the shared environment that appear to contribute to differences in intelligence, but, unlike with schizophrenia and other mental illnesses, it has been difficult to identify the specific genetic variants that contribute to the heritability of GCA. This unit will end with a discussion of genetic research on intellectual disability, an important application of intelligence research.Just FYI, one thing we will NOT consider in this unit but some of you will wonder about is developmental behavioral genetic research on intelligence. I promise that it will be covered in Unit 7.

I am sure many of you wondered about the impact of age on biometric estimates when we discussed general cognitive ability last week. Indeed some of you asked about this issue on the Forums. You were right to raise the question because this is an important issue in the behavioral genetic literature. Given its importance, I thought it might work best to place the question of age moderation in a larger context, which we do this week. We will begin the week by returning to the distinction between shared and non-shared environmental influences, an important distinction in the behavioral genetic literature. You will see that while shared environmental influences are not important for most behavioral phenotypes, there are a few exceptions (including general cognitive ability). However, in all of these exceptional cases, the magnitude of shared environmental influences decreases with age as the heritability increases.