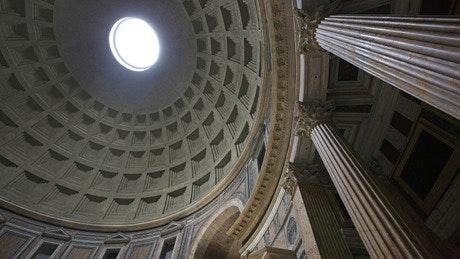 Roman Architecture is a course for people who love to travel and want to discover the power of architecture to shape politics, society, and culture.
Enroll in course

Roman urbanism and introduction to the wide variety of Roman buildings covered in the course.

It Takes a City: The Founding of Rome and the Beginnings of Urbanism in Italy

Evolution of Roman architecture from the Iron Age through the Late Republic with emphasis on city planning, wall building, and early Roman temple architecture.

Technology and Revolution in Roman Architecture

The Revolution in Roman Architecture through the widespread adoption of opus caementicium (concrete) used for expressive as well as practical purposes.

Civic, commercial, and religious buildings of Pompeii buried by the devastating eruption of Mount Vesuvius in A.D. 79 and later rediscovered. Daily life in Pompeii is illustrated through its bakeries and fast food stands and a moving account dramatizes what happened when disaster struck.

Lifestyles of the Rich and Famous: Houses and Villas at Pompeii

Domestic architecture at Pompeii from its beginnings to the eruption of Vesuvius with emphasis on the development of the domus italica and the Hellenized domus and featuring the House of the Faun and Villa of the Mysteries.

What befell the city of Herculaneum’s inhabitants when they tried to escape Vesuvius. The development of the city’s domestic architecture, especially the Houses of the Mosaic Atrium and the Stags, is traced as is the evolution of First and Second Style Roman wall painting, the latter transforming the flat wall into a panoramic window.

Gilding the Lily: Painting Palaces and Villas in the First Century A.D.

Third Style Roman wall painting in villas belonging to elite patrons. Third Style painting is characterized by departure from perspectival vistas and return to a flat wall decorated with panel pictures and attenuated architectural elements. The Fourth Style is a compendium of all previous styles. Both coexist in Nero’s Domus Aurea.

Painted renditions of special subjects inserted into Second through Fourth Style Roman wall paintings. These include mythological, landscape, genre, still life, and history painting, as well as painted portraiture. Highlights include the Dionysiac Mysteries paintings and the Riot in the Amphitheater, both from residences in Pompeii.

Transformation of Rome by Augustus. Claiming to have found Rome a city of brick and leaving it a city of marble, Augustus exploited marble quarries at Luna (modern Carrara) to build his Forum, decorating it with replicas of Greek caryatids associating his era with Periclean Athens. The contemporary Ara Pacis served as the Luna marble embodiment of Augustus’ new hegemonic empire.

Sepulchral architecture in Rome under Augustus. Roman tombs were built in a variety of personalized forms among them the pyramidal Tomb of the aristocrat Gaius Cestius, and the trapezoidal Tomb of Marcus Vergilius Eurysaces, probably a former slave who made his fortune overseeing the baking and public distribution of bread for the Roman army.

Architecture under the Julio-Claudian emperors: Tiberius' Villa Jovis on Capri, and, in Rome and at Portus, the eccentric architecture of Claudius with its unique combination of finished and rusticated masonry. The culminating masterwork is Nero’s Domus Aurea with its octagonal room, one of the most important rooms in the history of Roman architecture.

Graded: Did Nero’s Megalomania Shape the Domus Aurea or was Nero’s Palace in Rome Just Another Step in the “Roman Architectural Revolution?”

The Creation of an Icon: The Colosseum and Contemporary Architecture in Rome

The Flavian dynasty of Vespasian, Titus, and Domitian. Vespasian linked himself to Divus Claudius by completing the Claudianum, distanced himself from Nero by destroying part of the Domus Aurea, filling in the artificial lake and replacing it with the Colosseum. Titus commissioned Rome's first preserved example of the "imperial bath type," characterized by grand scale, axiality, and symmetry.

The Prince and the Palace: Human Made Divine on the Palatine Hill

The Domitianic Arch (and Tomb) of Titus celebrating the Flavian victory in the Jewish Wars; the Stadium of Domitian, its shape now preserved in Rome's Piazza Navona, the Imperial Palace on the Palatine Hill, designed by Rabirius and featuring Domitian as dominus et deus, and the Forum Transitorium, a narrow space with undulating columnar bays announcing the beginning of a "baroque" phase in Roman architecture. First Quiz is located here!

The Mother of All Forums: Civic Architecture in Rome under Trajan

Trajan’s monumental architecture in Rome references his expansion of the Roman Empire to its furthest reaches. Highlights include the Baths of Trajan and the Forum and Markets of Trajan, built on land that engineer/architect Apollodorus of Damascus created by cutting away part of the Quirinal Hill. The complex also includes the celebrated 125-foot Column of Trajan with a spiral frieze commemorating the emperor's military victories in Dacia.

Rome and a Villa: Hadrian's Pantheon and Tivoli Retreat

Architecture in and around Rome during Hadrian’s reign: the Temple of Venus and Roma possibly designed by Hadrian; the Pantheon, combining the marble porch and pediment of a traditional Greco-Roman temple with a vast concrete cylindrical drum, hemispherical dome, central oculus, and theatrical light effects; the Villa of Hadrian at Tivoli, where the emperor recreated buildings and works of art observed during his empire-wide travels; and the Mausoleum of Hadrian (Castel Sant'Angelo).

The Roman Way of Life and Death at Ostia, The Port of Rome

Tour of Ostia, characterized by multi-storied residential buildings and widespread use of brick-faced concrete. The city's public face features the Forum, Capitolium, Theater, and Piazzale delle Corporazioni with its black-and-white mosaic shipping company advertisements. The Insula of Diana, a four-floor brick apartment building, and warehouses like the Horrea Epagathiana highlight the Ostian appreciation of the aesthetic qualities of exposed brick facing.

Bigger is Better: The Baths of Caracalla and Other Second-and Third-Century Buildings in Rome

Exploration of a "bigger is better" philosophy; exposed brick tombs with painted stucco and architectural elements; the Temple of Divine Antoninus Pius and Faustina and its post-antique afterlife as the Church of S. Lorenzo in Miranda; the earliest surviving triple-bayed Arch of Septimius Severus in the Roman Forum; the Septizodium, a lively baroque-style façade for Domitian's Palace on the Palatine Hill; and the colossal Baths of Caracalla.

Timgad, Trajan’s colony for Roman army veterans, was designed as a castrum; Leptis Magna, with Carthaginian roots, was developed first under Augustus. Leptis-born Septimius Severus renovated his hometown featuring a forum, basilica, and arch. Entrepreneurs, providing animals to Rome's amphitheaters, commissioned Hunting Baths with intimate vaulted spaces revealed on the outside and silhouetted against the sea, suggesting that they knew how to innovate and enjoy life.

The baroque phenomenon in ancient Roman architecture where the traditional vocabulary of architecture (columns, pediments, et al) is manipulated to enliven building façades and inject them with dynamic motion. Appearing in Rome in the late first century A.D., baroque architecture was foremost in the Greek East where high-quality marble and expert marble carvers made it the architectural mode of choice. It foreshadowed Borromini’s showpieces of seventeenth-century Rome.

Roman Wine in Greek Bottles: The Rebirth of Athens

The rebirth of Athens under Rome’s foremost philhellenic emperors, Augustus and Hadrian. High quality Greek marble and expert Greek stone carvers produced notable edifices in Roman Greece dependent on a mutual exchange of architectural ideas and motifs between Rome and Athens. These include the Monument of Philopappos, the Library and Arch of Hadrian, and architectural additions or transformations made to the Acropolis and the Greek and Roman Agoras.

Romanization was meant to provide amenities to Rome’s new colonies while, at the same time, transforming them into miniature versions of Rome. The focus here is on western frontier sites in what are now North Italy, France, Spain, and Croatia. Highlights include: the Theater at Orange, the Maison Carrée and the Pont-du-Gard at Nîmes, and the Trophy of Augustus at La Turbie.

Except for the Aurelian Walls, Rome’s third century was an "architectural wasteland.” Diocletian created a new form of government called the Tetrarchy (four-man rule) with leaders in East and West. Public and private building campaigns in Rome and the provinces reflected the Empire's renewed stability and centered on enhancing or restoring buildings in the Roman Forum and constructing the Baths of Diocletian in Rome and Diocletian’s Palace at Split.

Rome of Constantine and a New Rome

Constantine commissioned buildings linked to the pagan past (Baths of Constantine) and others (Aula Palatina,Trier) looking to the Christian future. New architectural ideas abound. The "Temple of Minerva Medica" is decagonal and the Basilica Nova modeled on the frigidaria of Roman imperial baths. The Arch of Constantine commemorates Constantine's victory at the Milvian Bridge and serves as a compendium of Constantine's accomplishments matching those of “good” second-century Roman emperors.