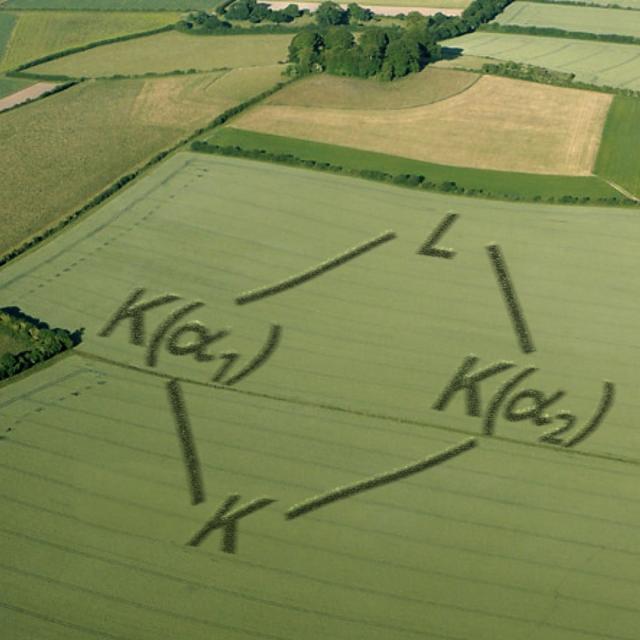 A very beautiful classical theory on field extensions of a certain type (Galois extensions) initiated by Galois in the 19th century. Explains, in particular, why it is not possible to solve an equation of degree 5 or more in the same way as we solve quadratic or cubic equations. You will learn to compute Galois groups and (before that) study the properties of various field extensions. We first shall survey the basic notions and properties of field extensions: algebraic, transcendental, finite field extensions, degree of an extension, algebraic closure, decomposition field of a polynomial. Then we shall do a bit of commutative algebra (finite algebras over a field, base change via tensor product) and apply this to study the notion of separability in some detail.
Enroll in course

We shall address the question of solvability of equations by radicals (Abel theorem). We shall also try to explain the relation to representations and to topological coverings.

Finally, we shall briefly discuss extensions of rings (integral elements, norms, traces, etc.) and explain how to use the reduction modulo primes to compute Galois groups.
Prerequisites

A first course in general algebra — groups, rings, fields, modules, ideals. Some knowledge of commutative algebra (prime and maximal ideals — first few pages of any book in commutative algebra) is welcome. For exercises we also shall need some elementary facts about groups and their actions on sets, groups of permutations and, marginally, the statement of Sylow's theorems.
Assessments

A weekly test and two more serious exams in the middle and in the end of the course. For the final result, tests count approximately 30%, first (shorter) exam 30%, final exam 40%.

There will be two non-graded exercise lists (in replacement of the non-existent exercise classes...)

This is just a two-minutes advertisement and a short reference list.

We introduce the basic notions such as a field extension, algebraic element, minimal polynomial, finite extension, and study their very basic properties such as the multiplicativity of degree in towers.

We introduce the notion of a stem field and a splitting field (of a polynomial). Using Zorn's lemma, we construct the algebraic closure of a field and deduce its unicity (up to an isomorphism) from the theorem on extension of homomorphisms.

We recall the construction and basic properties of finite fields. We prove that the multiplicative group of a finite field is cyclic, and that the automorphism group of a finite field is cyclic generated by the Frobenius map. We introduce the notions of separable (resp. purely inseparable) elements, extensions, degree. We briefly discuss perfect fields. This week, the first ungraded assignment (in order to practice the subject a little bit) is given.

This is a digression on commutative algebra. We introduce and study the notion of tensor product of modules over a ring. We prove a structure theorem for finite algebras over a field (a version of the well-known "Chinese remainder theorem").

We apply the discussion from the last lecture to the case of field extensions. We show that the separable extensions remain reduced after a base change: the inseparability is responsible for eventual nilpotents. As our next subject, we introduce normal and Galois extensions and prove Artin's theorem on invariants. This week, the first graded assignment is given.

We state and prove the main theorem of these lectures: the Galois correspondence. Then we start doing examples (low degree, discriminant, finite fields, roots of unity).

We continue to study the examples: cyclotomic extensions (roots of unity), cyclic extensions (Kummer and Artin-Schreier extensions). We introduce the notion of the composite extension and make remarks on its Galois group (when it is Galois), in the case when the composed extensions are in some sense independent and one or both of them is Galois. The notion of independence is also given a precise sense ("linearly disjoint extensions"). This week, an ungraded assignment is given.

We build a tool for finding elements in Galois groups, learning to use the reduction modulo p. For this, we have to talk a little bit about integral ring extensions and also about norms and traces.This week, the final graded assignment is given.