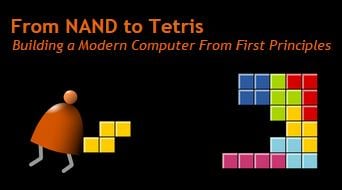 In this project-centered course* you will build a modern computer system, from the ground up. We’ll divide this fascinating journey into six hands-on projects that will take you from constructing elementary logic gates all the way through creating a fully functioning general purpose computer. In the process, you will learn - in the most direct and constructive way - how computers work, and how they are designed.

What you’ll need: This is a self-contained course: all the knowledge necessary to succeed in the course and build the computer system will be given as part of the learning experience. Therefore, we assume no previous computer science or engineering knowledge, and all learners are welcome aboard. You will need no physical materials, since you will build the computer on your own PC, using a software-based hardware simulator, just like real computers are designed by computer engineers in the field. The hardware simulator, as well as other software tools, will be supplied freely after you enroll in the course.

Course format: The course consists of six modules, each comprising a series of video lectures, and a project. You will need about 2-3 hours to watch each module's lectures, and about 5-10 hours to complete each one of the six projects. The course can be completed in six weeks, but you are welcome to take it at your own pace. You can watch a TED talk about this course by Googling "nand2tetris TED talk".

Course introduction and overview, the roles of abstraction and implementation in systems design, the road ahead.

We will start with a brief introduction of Boolean algebra, and learn how Boolean functions can be physically implemented using logic gates. We will then learn how to specify gates and chips using a Hardware Description Language (HDL), and how to simulate the behaviour of the resulting chip specifications using a hardware simulator. This background will set the stage for Project 1, in which you will build, simulate, and test 15 elementary logic gates. The chipset that you will build this module will be later used to construct the computer's Arithmetic Logic Unit (ALU) and memory system. This will be done in modules 2 and 3, respectively.

Boolean Arithmetic and the ALU

Using the chipset that we've built in the previous module, we will now proceed to build a family of adders -- chips designed to add numbers. We will then take a big step forward and build an Arithmetic Logic Unit. The ALU, which is designed to perform a whole set of arithmetic and logical operations, is the computer's calculating brain. Later in the course we will use this ALU as the centerpiece chip from which we will build the computer's Central Processing Unit, or CPU. Since all these chips operate on binary numbers (0's and 1's), we will start this module with a general overview of binary arithmetic, and only then delve into building the ALU.

Having built the computer's ALU, this module we turn to building the computer's main memory unit, also known as Random Access Memory, or RAM. This will be done gradually, going bottom-up from elementary flip-flop gates to one-bit registers to n-bit registers to a family of RAM chips. Unlike the computer's processing chips, which are based on combinational logic, the computer's memory logic requires a clock-based sequential logic. We will start with an overview of this theoretical background, and then move on to build our memory chipset.

A critically important aspect of building a new computer system is designing the low-level machine language, or instruction set, with which the computer can be instructed to do various things. As it turns out, this can be done before the computer itself is actually built. For example, we can write a Java program that emulates the yet-to-be-built computer, and then use it to emulate the execution of programs written in the new machine language. Such experiments can give us a good appreciation of the bare bone "look and feel" of the new computer, and lead to decisions that may well change and improve both the hardware and the language designs. Taking a similar approach, in this module we assume that the Hack computer and machine language have been built, and write some low-level programs using the Hack machine language. We will then use a supplied CPU Emulator (a computer program) to test and execute our programs. This experience will give you a taste of low-level programming, as well as a solid hands-on overview of the Hack computer platform.

Let's recap the last four modules: we've built some elementary logic gates (module 1), and then used them to build an ALU (module 2) and a RAM (module 3). We then played with low-level programming (module 4), assuming that the overall computer is actually available. In this module we assemble all these building blocks into a general-purpose 16-bit computer called Hack. We will start by building the Hack Central Processing Unit (CPU), and we will then integrate the CPU with the RAM, creating a full-blown computer system capable of executing programs written in the Hack machine language.

Every computer has a binary machine language, in which instructions are written as series of 0's and 1's, and a symbolic machine language, also known as assembly language, in which instructions are expressed using human-friendly mnemonics. Both languages do exactly the same thing, and are completely equivalent. But, writing programs in assembly is far easier and safer then writing in binary. In order to enjoy this luxury, someone has to translate our symbolic programs into binary code that can execute as-is on the target computer. This translation service is done by an agent called assembler. The assembler can be either a person who carries out the translation manually, or a computer program that automates the process. In this module and final project in the course we learn how to build an assembler. In particular, we'll develop the capability of translating symbolic Hack programs into binary code that can be executed as-is on the Hack platform. Each one of you can choose to accomplish this feat in two different ways: you can either implement an assembler using a high-level language, or you can simulate the assembler's operation using paper and pencil. In both cases we give detailed guidelines about how to carry out your work.