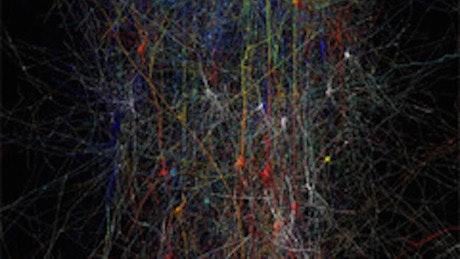 These are very unique times for brain research. The aperitif for the course will thus highlight the present “brain-excitements” worldwide. You will then become intimately acquainted with the operational principles of neuronal “life-ware” (synapses, neurons and the networks that they form) and consequently, on how neurons behave as computational microchips and how they plastically and constantly change - a process that underlies learning and memory.
Enroll in course

Recent heroic attempts to realistically simulate large cortical networks in the computer will be highlighted (e.g., “the Blue Brain Project”) and processes related to perception, cognition and emotions in the brain will be discussed. For dessert we will deliberate on the future of brain research, including the questions of “brain and art”, consciousness and free will. For more information see the course promo below and read “About the course.”

Brain Excitements for the 21st Century

The Materialistic Mind - Your Brain's Ingredients

This module's purpose is to acquaint you with "The materialistic mind – your brain’s ingredients". You will become intimately acquainted with the beauty and variety of neurons – the elementary building block/microchips of the brain. We will highlight a big controversy between two great anatomists (Ramon y Cajal and Camillo Golgi) who both received the Nobel Prize in 1906. They asked whether the neuron is a separate “independent” unit (like other cells in other tissues) or whether it is part of a continuum? We will next discuss the neuron as an input-output device and highlight a key property of the nervous system, namely that neurons connect to each other via a wonderful devise called “synapse”.

In this module we will discuss the "Electrifying brain – passive electrical signals". We will show that neurons are electrical device and learn what enables neurons to become “electrifying”. Here we will describe only the passive (vs. active) electrical properties of neurons. We will show that, at the quiescent state, the difference in electric potential across the cell’s membrane is always negative inside the cell (“the “resting potential”); we next show that the membrane behaves like an electrical (resistance-capacitance) RC circuit and highlight the notion of “membrane time constant” and, consequently, the ability of neurons to summate (in time) successive (synaptic) inputs (“electrical memory”) – a fundamental mechanism utilized by the brain. We will also show that when the synapse is activated, it generates an analog electrical signal (“the post-synaptic potential”, PSP) in the receiving (“post-synaptic”) cell. Most interestingly, there are two types of synapses in the brain – “excitatory” and “inhibitory” – we will discuss how these two opposing signals interact in the receiving ``neuron. This module is more technical than the more descriptive first two lessons; we encourage those of you who are not familiar with basic electricity (resistance, capacitance, Ohms law and Kirchoff’s law) to read about these in the sources links for this week’s lecture.

In this module we are covering "Electrifying brains – active electrical spikes". In the previous module we learned that: 1-neurons are electrical devices, 2 - that the membrane behaves as an RC circuit, 3 - that synapses operate by opening a new cross-membrane conductance attached with a battery. In the present module we will proceed to deal with the active electrical aspects of neurons. Synaptic inputs are the elementary (input) sources to neurons and, typically, many (excitatory) of them are required to summate (“temporal summation”) to generate a highly (“all or none”) output signal – the notorious spike (or “action potential”). In our current understanding, sensory, motor, emotional, etc., information is represented by a particular set of neurons that “fire” these spikes. So no movies or music in your brain only spikes representing (coding for) these movies and music. We will focus on the membrane mechanisms underlying the generation of the spike and in particular on the model of Hodgkin & Huxley for the spike which is probably the most fundamental and beautiful model in neuroscience. Hodgkin & Huxley received the Nobel Prize in 1963.

This module discusses "Neurons as plastic/changing devices". Probably the most unique aspect of the nervous tissue is its amazing capability to constantly and adaptively change in response to a challenging environment; this capability enables us to learn and to store memories. We start by a short discussion about the notion of learning in the brain and then highlight various mechanisms that support learning and memory – introducing the term ‘neuronal plasticity”. In particular “functional plasticity”, whereby the efficacy of existing synapses is changed as well as “structural plasticity”, whereby learning/memory processes are associated with anatomical changes - the formation of new synaptic connections and with neurogenesis – the birth of new nerve cells (yes, also in the adult brain). A mathematical model that captures some aspects of functional plasticity will also be introduced together with several new exciting experimental finding related to “neuronal plasticity”.

By now you are well equipped for a successful dive into this module's topic - "Cable theory and dendritic computations ". We are ready to make a conceptual “leap” and to discuss a fascinating topic. Namely, how the anatomical and electrical machinery of neurons endow neurons with computational capabilities. Computing the orientation of line and the direction of motion (in the visual system), or the location or intensity of sound (in the auditory system) and planning a movement for grasping a cup of coffee (in the motor system), are all computations that our brain performs effortlessly. The success of these computations is absolutely critical for our survival. Hubel and Wiesel (Nobel laureates in 1981) showed that nerve cells in the visual cortex of the cat are sensitive to the orientation of lines in the visual world (orientation selectivity). So that when you look at the world around you, you may “use” these cells to identify the angle of a tree (vertical) and of the eyes looking at you (horizontal). But how do nerve cells (and the brain as a whole) perform these computations? In the 1960's Wilfrid Rall regarded neurons as electrically-distributed elements (rather than as a “point” element and, consequently, he developed the “cable theory for dendrites” - highlighting the principles that govern the spread/attenuation of synaptic potentials (the cell’s input) from their dendritic site of origin to the soma/axon (the output) region. We will see that the cable properties of dendrites empower neurons with computational capabilities (e.g., neurons that compute the direction of motion). We will discuss a few early and more recent theoretical ideas on how the “neuronal hardware” – synapses, dendrites, axons and the signals that they carry - may implement elementary computations. We will end by providing a few recent and fantastic technological advances that enabled us, for the first time ever, to validate experimentally some of these theoretical ideas. We hope that you will enjoy this conceptual “leap” from discussing the biophysical properties of neurons to highlighting their computational functions.

Cortical Networks - Out of the Blue Project

This module is based on what you have learned in modules 3 to 6: how single cells function, how they are connected via (plastic) synapses to each other and how they might perform specific computations. Here we actually connect a network of neurons (using the “blue machine super computer”) so that we can simulate mathematically the activity of a large network (the “Blue Brain Project” BBP centered in EPFL, Lausanne, Switzerland). We know how to simulate a single neuron (the Hodgkin and Huxley model) and how to simulate synapses and dendritic cable (Wilfrid Rall model) so we can connect neuron models and build realistic networks in the computer. We started with simulating the mammalian neocortex, a relatively new structure in evolution (200 million years old). In each cubic mm of the neocortex (e.g., of rat), there are about 100,000 cells, 4 Km of wires (dendrites and axons) and about 100 million synapses. We can today integrate experimental data (anatomical and physiological) and mathematical methods, and come close to simulating the electrical and synaptic activity in several cubic mm of the neocortex. We will learn about the neocortex - including the neuron types it consists of - and how we go about simulating such a huge neural circuit. We will next discuss what could we learn from it and what are we aiming at next. We will end by describing the recently announced, EU Flagship Project – the “Human Brain Project” (HBP). The BBP served as a seed for the HBP, but the latter is much broader and even more ambitious, aiming at developing new approaches for treatments of brain diseases (so urgently needed) and advancing the future of neuroscience and of brain-inspired computing and robotics.

During this module we will have a special lecture which will be given by Prof. Israel Nelken from the Hebrew University in Jerusalem, who will discuss "Perception, action, cognition and emotions". Until today we have focused mainly on the function of single cells and small networks. Module #8 dwells into higher level computations and especially "the story of sound". The auditory system converts sound into electrical signals. Hair cells, basilar membrane, the cochlea and others are all tools which the brain uses in order to translate the outer world into neuronal activity. The next step is perception – processing the sensory information into useful representation. One beautiful example is the case of using binaural cues for the localization of sound. Perception leads the organism to actions – the brain predicts the world and computes the action that will yield a maximal reward and avoid punishment. What happens in the case of surprises? Here, higher level computation is needed. We will end the lecture with emotions – What are they, how are they represented in the brain and how they affect our actions.

From Synapses to Free Will?

And then there are the “high level” fascinating questions that only recently brain researchers dared to ask. Do we have free will? And what is this subjective feeling of consciousness? These old-issues, previously dealt solely within the humanities and social sciences, receive recently new perspective within modern brain research. And the new understanding that emerged brings with it new ethical question (“Neuroethics”) – e.g., could we read thoughts directly from the brain (“brain polygraphs”)? This brings the question as to how similar are our individual brains in terms of representing and coding specific information (e.g., a face that we see)? Could we use brain scans/probes in order to communicate with the brain of people in coma? Is it possible to electrically stimulate the brain in order to improve our capabilities (“enhance cognition”)? These issues and others are awaiting for you in this module.

Within a short period of time you have mastered a great deal of material and we very much hope that you have enjoyed this experience of learning about the brain by using its unique plastic capabilities.

We want to thank you for your active participation, for enabling us to improve during the course and for the many compliments which we received from many of you.