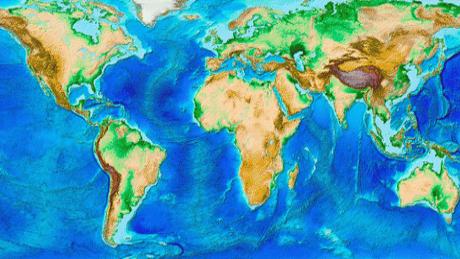 Earthquakes, volcanoes, mountain building, ice ages, landslides, floods, life evolution, plate motions—all of these phenomena have interacted over the vast expanses of deep time to sculpt the dynamic planet that we live on today. Planet Earth presents an overview of several aspects of our home, from a geological perspective. We begin with earthquakes—what they are, what causes them, what effects they have, and what we can do about them. We will emphasize that plate tectonics—the grand unifying theory of geology—explains how the map of our planet's surface has changed radically over geologic time, and why present-day geologic activity—including a variety of devastating natural disasters such as earthquakes—occur where they do. We consider volcanoes, types of eruptions, and typical rocks found there.

Finally, we will delve into the processes that produce the energy and mineral resources that modern society depends on, to help understand the context of the environment and sustainability challenges that we will face in the future.

In the lectures for this week, we will consider what an earthquake is, how it occurs, how we can record and measure its size, and what we can do to mitigate damage. Our first weekly assignment consists of reporting your own experience with earthquakes (if any). The Week 1 Lab gives you a chance to work with seismograms, locate an earthquake epicenter, and determine magnitude. Finally, the Week 1 Discussion addresses the balance between risks from quakes and costs of preventive measures.

In the early twentieth century, publication of the hypothesis on continental drift caused an uproar that soon died down. Data collected in mid-century led geologists to reconsider the idea that continents could move. During the 1960s and 1970s, old ideas were reworked into what is now called the theory of plate tectonics. As we will see, this robust theory encompasses many geological phenomena that appear to be unrelated at first glance: earthquakes and volcanoes, but also ice ages, fossils, and mountains. Today, plate tectonics provides an overarching framework for interpreting the Earth. We study its details in Week 2, but we will return to this theory again and again throughout the rest of this course.

This week, you will learn how and where rocks can melt, and what happens when molten material of various compositions bursts out of the ground. The lecture videos also cover different types of eruptions, as well as the rocks and mountains produced by them. In the lab, you will study details about the 1980 eruption of Mount St. Helens and the eruption of Mount Vesuvius in the year 79. The discussion forum gives you the opportunity to weigh risks to people living on or near volcanoes and what can be done to minimize damage and loss of life. The weekly assignment provides a place for you to share your own experiences with volcanoes or eruptions or, if you have never been near a volcano, your thoughts about such events.

As part of the Week 4 Assignment, you will take a close look at your daily surroundings to identify Earth resources. The video lectures for the week examine various aspects of finding, extracting, and using resources such as metals and stones. For the lab, you will utilize Google Earth to examine several mining sites around the world. In the discussion, you will weigh the pros and cons of mining operations, as many communities have had to do already. This week also includes peer grading discussions, as explained on the How Graded Discussions Work page. Finally, we provide an optional assignment for those who would like to identify some common minerals.

The video lectures for this week cover various aspects of energy usage by modern civilization, especially our utilization of fossil fuels. The Week 5 Lab sends you on a Google Earth tour of energy-producing sites around the world, places where both conventional and alternative forms of energy are being generated. The Week 5 Assignment gives you a chance to survey your own personal use of energy – where does it come from and how much do you use – and then to share the information with others in the class. During the Week 5 Discussion, you will consider the implications of how society uses the energy of fossil fuels and the implications for the local environment and global climate.