Elizabeth Dale-Deines is Teacher Programs Coordinator at the Smithsonian American Art Museum. Since 2014, she has taught DC-area educators and students how to engage with artworks as rich texts and provocation of deeper inquiry. She has presented at regional and national conferences on interdisciplinary education and has collaborated closely with a local research project of Harvard Graduate School of Education’s Project Zero. Elizabeth served as American Art’s Distance Learning Coordinator between 2010 and 2014, bringing the Museum’s collection to lifelong learners in the States and dependents of American military personnel around the world via videoconference. Elizabeth has a B.A. in psychology from the University of Virginia and an M.A.T. in museum education from the George Washington University. 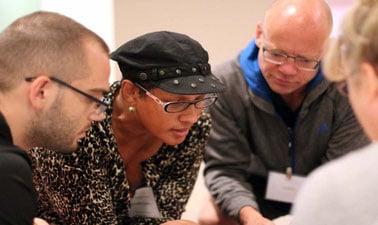