Yen‐Jie Lee completed his undergraduate degree and Master’s in Physics at the National Taiwan University and his doctoral work at MIT in 2011 under the supervision of Wit Busza. After postdoctoral work at the Laboratory for Nuclear Science at MIT, he completed a combined CERN and Marie Curie Fellowship at CERN from 2012 to 2013. He joined the MIT Physics faculty in September 2013. He served as one of the Heavy Ion Physics Group co-conveners in the CMS collaboration from 2014 to 2016. Since 2016, he has been appointed as heavy-ion physics executive board representative in the CMS collaboration.
Prof. Lee received an Early Career Research Award from the U.S. Department of Energy in 2015, an NEC Corporation Fund Award from the MIT Research Support Committee, and a Sloan Research Fellowship from the Alfred P. Sloan Foundation in 2016. He was promoted to Associate Professor of Physics in 2018. 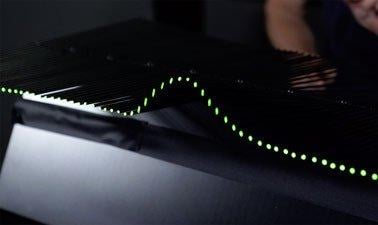 This course offers the you the chance to explore the many aspects of Vibrations and Waves and how they appear in physics, ranging from simple mechanical systems, to the light that we see, and even to the quantum realm. A foundational study of waves and vibrations will prepare learners [...]
Vibrations
Waves
Electromagnetic Waves
Physics
Mechanical Systems
Quantum
Resonance
Harmonic Motion
Polarization
Interfaces
Physical Phenomena
Atom
Superposition
Electromagnetics
Quantum Mechanics
View more details
Course Auditing
EdX
MIT
MITx
Sci: Physics
Intermediate
13-24 Weeks
11-20 Hours/Week
83.00 EUR
English
English