Bruno Schindler acquired the skills of practical building and landscape conservation at an early age. Later on, between 1985 to 1986, he researched the palace architecture of the Roman Renaissance and the architecture treatise of Andrea Palladio - the Quattro Libri - at the Roman Max Plank Institute Bibliotheca Hertziana, under the direction of C. L. Frommel. He also studied mathematics at the RWTH Aachen University and architecture at the Instituto Universitario di Architettura in Venice (IUAV) and at the Institut Superieur d'Architecture St. Luc in Liège. Since 1999 he has led numerous research projects in collaboration with Prof. Jan Pieper; in particular on questions of the reconstruction of historical building processes and building scales, which have been financed by the DFG and the Gerda Henkel Foundation. In 2017, Bruno Schindler published a summary of his research work on the Aachen Palatine Chapel under the title "Thron und Altar – Oktogon und Sechzehneck". 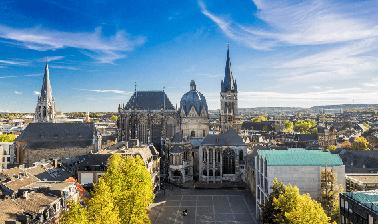